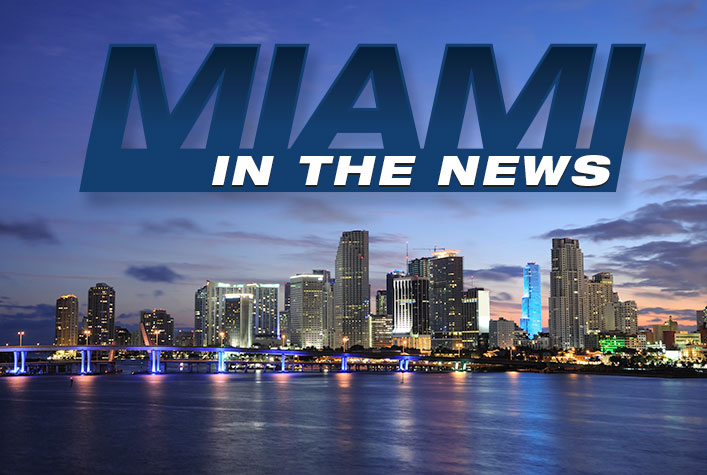 Miami, FL – In August, Brazil moved back into the top spot for consumers searching Miami properties on Miamire.com, according to the 30,000-member MIAMI Association of Realtors (MIAMI).

Brazil topped the list of countries—second only to the U.S.—that conducted searches on the MIAMI website (www.miamire.com) in June.   Despite the weakening of the Brazilian currency in recent months, Brazil remains a top market for Miami real estate.  Following Brazil were Argentina, Colombia, and Venezuela.  Rounding out the top 10 were Russia, Malaysia, France, Spain, and the United Kingdom.

MIAMI is the ambassador association for the National Association of Realtors to SECOVI-SP in Brazil and has conducted extensive outreach to Brazilian agents and buyers since 1996.  MIAMI has more than 100 partnerships with real estate associations worldwide, including FENACI, COFECI, and the Balneario Camboriu Association (ACIBC) also in Brazil.  MIAMI also shares listings with Brazilian associations through its landmark International Data Exchange, which further promotes MIAMI members and the South Florida market.  In August, Balneario Camboriu signed an agreement to share listings with MIAMI, further boosting exposure for Miami properties in Brazil.  Miami also promotes the Miami real estate market at international events, including Salon de l’Immobilier in Paris, SIMA in Madrid, and in the upcoming Jornada Internacional Inmobiliaria  in Argentina.

“Brazil remains a very strong market for Miami real estate, as reflected by our property search and closed sales statistics,” MIAMI Chairman of the Board Natascha Tello said. “It’s very rewarding to see the success of our international outreach with markets like Argentina, Brazil, France, Russia and Spain.  It’s also exciting to see new markets we’ve been targeting, such as Germany and India, cement their interest in the Miami market.”

“These property search statistics are indicative of Miami’s status as a major global city,” said 2013 MIAMI Association of REALTORS Residential President Fernando I. Martinez. “Miami real estate continues to attract attention from all over the U.S. and from worldwide markets.  Such attention is driving sales and fueling the robust performance of the Miami real estate market”

Miami is also a top choice for consumers in many U.S. markets.  Not including Florida, the top Ten U.S. States and top cities in that state for consumers searching Miamire.com in August 2013 were:

Nationally, Miami is consistently one of the top markets for most of the highest ranking countries searching for property in the U.S. – including Canada, Germany, Brazil, Italy, France, Netherlands, Spain, Russia, and Switzerland.  For the first time, it was also a top choice for Turkey in August.  The top countries (outside the U.S.) where global consumers were most engaged on Realtor.com® & Realtor.com® International were:

*Country with Miami or Fort Lauderdale as top searches.

Based on the 2012 Miami International Market Report, Miami attracts a significant number of buyers from countries not reflected in property search rankings above, including Venezuela, Argentina, and Colombia.

In August, Miami dropped to third place behind Detroit and Los Angeles, which had the top spot for months,  among the top ten overall most searched U.S. cities by non-U.S. consumers throughout the month of June 2013 on Realtor.com® & Realtor.com® International.  Miami had been in second place the last three months.

The MIAMI Association of REALTORS was chartered by the National Association of Realtors in 1920 and is celebrating 93 years of service to Realtors, the buying and selling public, and the communities in South Florida.  Comprised of four organizations, the Residential Association, the Realtors Commercial Alliance, the Broward County Board of Governors, and the International Council, it represents more than 30,000 real estate professionals in all aspects of real estate sales, marketing, and brokerage.  It is the largest local Realtor association in the U.S., and has partnerships with more than 100 international organizations worldwide.  MIAMI’s official website is www.miamire.com.