HOLLYWOOD, Fla. —- Two people slowly rolled the 10-layer, 5-foot rum cake to front of the stage as the thousands in attendance oohed and awed.

One cake layer for each association decade.
(The MIAMI 100th Inaugural in Pictures: Click Here)

The MIAMI Association of REALTORS had achieved many accomplishments in its 100 years of service to the home buying and selling public and to South Florida. Since its 1920 inception, MIAMI has increased its membership to 52,000, become the largest Realtor association in the country, become the fifth largest commercial board in the U.S., signed 222 international partnership agreements, launch the first commercial MLS in the nation, conduct 4,000 annual education seminars, provide 200 premium products and services to its members and more.

“We’ve done all this standing on the shoulders of all who came before us and that’s really exciting,” said MIAMI REALTORS CEO Teresa King Kinney, who last year was awarded the highest honor and distinction for a Realtor association executive when she received the 2019 National Association of Realtors (NAR) William R. Magel Award of Excellence. 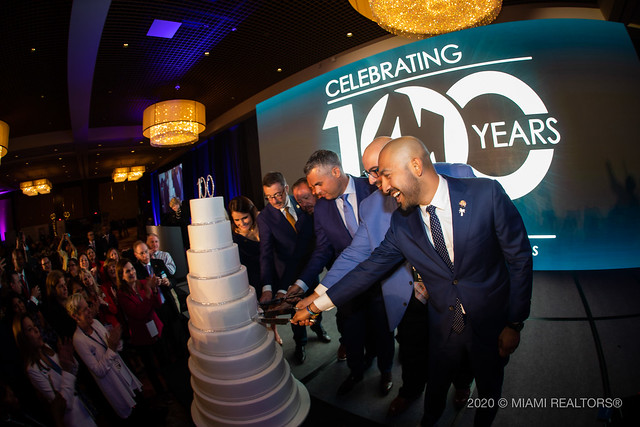 Passing of the Gavel

The afternoon of celebration began with the annual passing of the gavel ceremony. Seventy-one past MIAMI REALTORS presidents stepped in front of the stage and passed around the historic MIAMI REALTORS gavel.

The oldest living board president, 90-year-old Ken Rosen, participated in the ceremony. Rosen, an author of three books on commercial real estate, served as board president in 1971-72. Rosen has been a member of the board since 1955.

Longtime MIAMI leader Christina Pappas installed the 101 MIAMI leaders who will be spearheading the association in 2020.

Christina Pappas also noted how the MIAMI leaders are volunteering their time to serve the local real estate market. The MIAMI leaders compete on clients but can come together and help each other improve their skills and join forces on leading the association.

“You don’t see any other group except the Realtor community get together like this,” Christina Pappas said.

The MIAMI Association of Realtors (MIAMI) elected Jorge L. Guerra Jr. as its 2020 chairman of the board. Guerra Jr. is the president and chief executive officer of Real Estate Sales Force (RESF) and has been responsible for the firm’s strategic direction and growth since its inception in 2005. Guerra Jr.’s brokerage leverages the latest technology to aggressively market properties worldwide.

“We’re ready to lead,” Guerra Jr. said at the 100th Inaugural. “This association has created a platform where top emerging trends and the latest technology and legislative issues are in the forefront of what we’re looking at. We have a board of governors that are true leaders and experts in our industry. And more importantly, we are backed by world-class professionals that run the largest association in the nation.”

The MIAMI Association of Realtors Commercial (MIAMI Commercial) elected Fernando Arencibia Jr., C2EX as its 2020 president. Arencibia Jr. is the Broker-CEO of Arenci Properties Realty in Miami. He has more than 17 years of experience in the real estate industry, specializing in commercial and investment residential real estate in South Florida.

“You have a voice in every board meeting,” Arencibia Jr. said.

The nation’s largest local Realtor association elected Miami native Alberto Carrillo as its 2020 Residential President. Carrillo is vice president of RelatedISG International Realty, after serving as Sales Manager originally for the Downtown/South Beach Offices which were then relocated to the Edgewater Office. He has more than 13 years of Miami real estate experience.

The MIAMI Association of Realtors (MIAMI) elected Sharon R. Lindblade as its 2020 Broward-MIAMI President. Lindblade has been around the real estate industry for more than 20 years, and now works for Century 21 Hansen Realty Inc. in Fort Lauderdale.

“We continue to provide our members with unparalleled products and services. Our members are our most valuable asset,” Lindblade said.

The MIAMI Association of Realtors (MIAMI) elected David Abernathy as its 2020 Jupiter-Tequesta-Hobe Sound-MIAMI President. Abernathy is a business manager at Waterfront Properties, the largest purveyor of luxury real estate in North Palm Beach and Martin Counties. He works with Rob Thomson, the President/CEO of Waterfront Properties.

The MIAMI Association of Realtors (MIAMI) elected Peter Ortega as its 2020 Young Professionals Network President (MIAMI YPN). Ortega is a dynamic, customer-focused bilingual Broker Associate for Keller Williams Realty, Inc. on Miami Beach. He has worked for Keller Williams since October 2013, and was promoted at the brokerage to become a productivity coach from April 2018 to May 2019.

“When I was growing up in Los Angeles in the 1980s, I never thought I would be here today,” Ortega said. “Now that I am, I want to encourage every one of you to use your voice.”

MIAMI honored its 2019 industry leaders and award winners at its February 28, 2020 Inaugural Celebration.

24 Steps for the Most Productive 24-Hour Day

Top 10 Listing Presentation Tips to Set You Up for Success