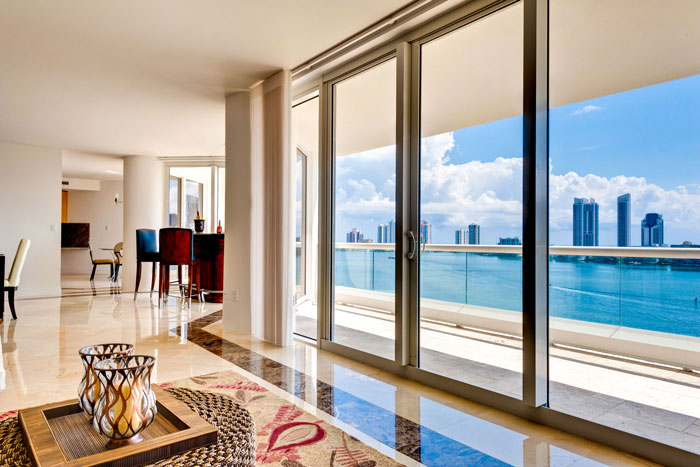 Miami view from inside home

“Miami condo sales continued their upward trend in March,” MIAMI Chairman of the Board José María Serrano said. “A rise in mid-market condo sales and mortgage rates hovering near one-year lows factored into the overall increase.”

Lack of access to mortgage loans continues to inhibit further growth of the existing condominium market. Of the 9,307 condominium buildings in Miami-Dade and Broward counties, only 12 are approved for Federal Housing Administration loans, down from 29 last year, according to Florida Department of Business and Professional Regulation and FHA.

The median time to contract for condos was 80 days, a 5.3 percent increase from 76 days last year. The median number of days between listing date and closing date increased 4.3 percent to 120 days.

In March, statewide median sales prices for both single-family homes and condo-townhouse properties rose year-over-year for the 87th month-in-a-row. The statewide median sales price for single-family existing homes was $256,000, up 2 percent from the previous year, according to data from Florida Realtors Research Department in partnership with local Realtor boards/associations. Last month’s statewide median price for condo-townhouse units was $189,500, up 3.6 percent over the year-ago figure. The median is the midpoint; half the homes sold for more, half for less.

Condominiums comprise a large portion of Miami’s cash purchases as 50.1 percent of condo closings were made in cash in March compared to 19.1 percent of single-family home sales.

Total active listings at the end of March increased 3.9 percent year-over-year, from 22,590 to 23,465. Active listings remain about 60 percent below 2008 levels when sales bottomed.