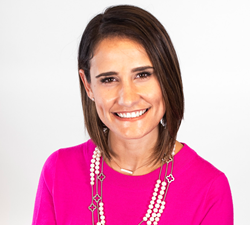 The nation’s largest local Realtor association has elected Miami native Christina Pappas as its 2017 Residential President. She and the entire Board of Directors were installed Feb. 3 at the MIAMI Association of REALTORS® (MIAMI) 2017 Inaugural and Awards Celebration.

“I am honored, humbled, and excited to continue the legacy of the past presidents while moving our organization forward through innovation, transparency, and advocacy,” Pappas said. “Ensuring our members are profitable, successful and that their business thrives are the most important priority of our association. Realtors are the heart of the community and our association has put together incredible programs for our members.”

Pappas, 31, is one of the youngest residential presidents in the 97-year history of the MIAMI Association of REALTORS®.

Pappas is a Realtor with The Keyes Company, the largest independent brokerage in Florida, and was recently promoted to manage the firm’s Brickell area office. She oversees 41 agents, who are also active in Shenandoah, Coconut Grove, the Roads and Greater Downtown Miami.

Pappas is the daughter of Keyes President and CEO Mike Pappas. Christina’s grandfather — Theodore J. Pappas — served as The Keyes Company chairman in 1969 and as MIAMI board president in 1975. Theodore J. Pappas received MIAMI’s 1963 Charles A. Post Trophy, which honored Realtors for their outstanding work with the board of directors, with special committees or with civic involvement.

When her grandfather died in 2011, Christina Pappas left her hospitality career in Los Angeles to join the family business in South Florida.

Pappas’ strengths are working with the “next generation of Realtors” or those under 40 years old. Pappas is integral in The Keyes’ young professionals and millennial initiative. She is working to change how Keyes markets to customers and agents – and to increase agent production for those under 40 years old from 15 percent of the company’s business to 25 percent in the next five years.

In 2016, Pappas became one of 13 district vice presidents to serve in the leadership of Florida Realtors®, the state’s largest professional association. Pappas served as District Four vice president and became one of the youngest to ever hold the position. District Four encompasses Realtor associations in Miami-Dade County and the Florida Keys, and is the largest in the state.

Pappas attended Westminster Christian School in Miami before attending Cornell University in Ithaca, N.Y. She graduated from the School of Hotel Administration in 2007 and then went to work in sales for the Viceroy Hotel Group in Los Angeles.

Pappas has several notable achievements on her Realtor resume. She was named The Keyes Company Rookie of the Year in 2012. She was also picked as the Women’s Council of Realtors Rising Star in 2013. Pappas has helped to create a top producing office in Coral Gables, increasing per person productivity to the highest it has been in years. In 2015, Pappas earned MIAMI YPN of the Year.

About the MIAMI Association of REALTORS®
The MIAMI Association of REALTORS® was chartered by the National Association of Realtors in 1920 and is celebrating 97 years of service to Realtors, the buying and selling public, and the communities in South Florida. Comprised of six organizations, the Residential Association, the Realtors Commercial Alliance, the Broward Council, the Jupiter Tequesta Hobe Sound (JTHS) Council, the Young Professionals Network (YPN) Council and the award-winning International Council, it represents nearly 45,000 real estate professionals in all aspects of real estate sales, marketing, and brokerage. It is the largest local Realtor association in the U.S., and has official partnerships with 160 international organizations worldwide. MIAMI’s official website is http://www.miamire.com

Christopher Zoller Elected to Lead the Largest Local Realtor Association in the U.S.