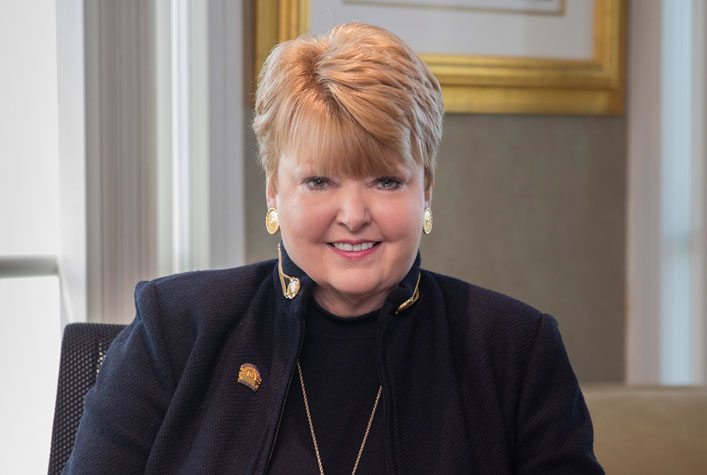 MIAMI — MIAMI Association of Realtors (MIAMI) CEO Teresa King Kinney was awarded the highest honor and distinction for a Realtor association executive as the 2019 recipient of the National Association of Realtors (NAR) William R. Magel Award of Excellence. NAR President John Smaby presented the prestigious award to Kinney at the National Board of Directors Meeting during their annual conference held in San Francisco, California, today.

The William R. Magel Award of Excellence is presented annually to an individual who has truly excelled in his or her role as an association executive of a Realtor association. The most compelling candidates are those who are well-known within the AE community, with an extensive record of participation, mentorship and contributions that is consistent with the Award’s qualifications.

“It is such an honor and a privilege to receive this very special recognition and award from the largest trade association in the world,” Kinney said. “This continues to be my passion and the opportunity of a lifetime, to be able to work with and represent MIAMI Realtors, the largest local association in the U. S. and all our great communities in Miami and South Florida locally and worldwide.”

In his presentation, National President John Smaby cited many of our accomplishments over the years and this truly is an award for our CEO and as Kinney said “for all our leaders, members and professionals in the MIAMI Association of Realtors.”

Kinney has led the nation’s largest local Realtor association for 26 years, playing an integral role in making Miami a top real estate market for both domestic and international investment.

Kinney came to Miami from St. Joseph, Missouri, where she had been CEO for the Realtor association for many years. When Kinney began with MIAMI in August 1993, the board had just 5,000 members.

Over the past 26 years, Kinney would lead the association to unprecedented growth. Today, the MIAMI board has a total of 52,000 members in four counties (Miami-Dade, Broward, Palm Beach and Martin).

Under Kinney’s leadership, MIAMI launched landmark and innovative global partnerships, brought an unparalleled number of new and exclusive Realtor products and services to its members and merged with several local boards. MIAMI’s first merger under Kinney was in 1997 when the association merged with the Miami Beach association, followed by two mergers in 2010 and another in 2015.

Kinney led MIAMI to enormous international success, helping Miami become the international brand it is today. Kinney has helped MIAMI sign a record 220 global partnerships with real estate organizations around the world. MIAMI has bilateral agreements with real estate associations in more than 50 countries. The organizations are part of MIAMI’s Global Referral Network, which links Miami member properties in South Florida with more than 1 million real estate professionals around the world.

Kinney has presented a myriad leadership and professional development seminars at state, national and international association meetings and public venues across the U.S., Latin America, Europe, and Asia and has written several articles on association management and leadership.

About the MIAMI Association of Realtors

The MIAMI Association of Realtors was chartered by the National Association of Realtors in 1920 and is celebrating 99 years of service to Realtors, the buying and selling public, and the communities in South Florida. Comprised of six organizations, the Residential Association, the Realtors Commercial Alliance, the Broward-MIAMI Association of Realtors, the Jupiter Tequesta Hobe Sound (JTHS-MIAMI) Council, the Young Professionals Network (YPN) Council and the award-winning International Council, it represents 52,000 total real estate professionals in all aspects of real estate sales, marketing, and brokerage. It is the largest local Realtor association in the U.S. and has official partnerships with 220 international organizations worldwide. MIAMI’s official website is www.miamirealtors.com

Does your online presence reflect who you are offline?